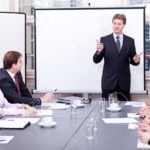 “I’d like to make a motion.” How often have you heard someone pop this little surprise at a meeting? It comes right out of the blue, like an unwanted telephone solicitation from a goldfish babysitting service.

You’ve been to those awkward meetings. Team members get together to discuss a project while munching on stale muffins filled with an indescribable goop that’s possibly imitation jam. The group tackles an important matter such as what to call the annual bean-bag toss fundraiser. Ideas get batted back and forth. One of them knocks over a lamp in the corner.

Then someone says, “I move we that we name it ‘Moolah Toss-Arama’.”

Making a motion is a procedure usually reserved for formal meetings such as parliament, or the annual meeting of the Glunville Dinner Theatre and Half-Curling Club. But most meetings aren’t that formal. So when you hear someone propose a motion, you find yourself whispering to the half-asleep junior assistant next to you, “Hmm, that’s mighty fancy, highfalutin talk. Gosh, darn, must be something important” – only to find out later that it isn’t.

In the meantime, you’re a bit out of sorts. Perhaps the proposer knows something about procedural rules that you don’t. After all, she sounds pretty formal; she must know what she’s doing. On the other hand, you might think that this person is trying to pull a fast one. She’s not getting her way, so she’s brandishing a procedural contrivance to wow the rest of us.

Sometimes, when someone makes a motion at a meeting, it’s a proposal for something in which they have a vested interest, but aren’t sure if there is support for it. So, they propose a formal-sounding motion, and hope that everyone votes in favor.

At that point, nobody knows quite what to do. The motion is on the floor. Or on the table. Or on the plate of stale muffins in between. Amidst the hubbub, of which there is a considerable amount, someone pipes in with, “I second that motion”.  This is usually done with sincere conviction and a loud voice. Or it’s sung by Smokey Robinson. Apparently legitimacy increases when someone raises their voice and emphasizes the “I” in, “I second that motion.”

Perhaps they’re just offering tactical support. Maybe they figure the favor will be returned at some point in the future.

After that, no one knows what to do and more ideas are kicked around. There may be a vote, but someone disagrees with the voting procedure. The meeting goes off track. Everyone flies off in all directions. And the mixed metaphors crash into each other in a great crescendo.

Here’s the thing though. Motions are meant to start discussions, not finish them. This seems counter-intuitive, but it makes sense. Whether or not you’re using parliamentary procedure, the idea is to introduce the motion before the discussion, not after it.

Ideally, the chair would place the item on the agenda in advance. The agenda might say: “Approve pricing recommendation from the marketing committee.” At the start of the discussion, the chair invites the marketing director to introduce her motion with a specific recommendation. “I move that the price be established at $20,” she says. A seconder follows. Having a seconder prevents frivolous ideas from dominating the agenda – like sing-along gangsta rap classes for toddlers. The seconder may not support the item, but feels that it warrants a discussion.

With the motion on the table, the chairperson asks for comments and questions. Usually this starts with person who made the motion providing a brief overview and the main reasons for support. Ideally, they would have pre-circulated a recommendation for everyone to review, and then everyone asks their questions. Order prevails. World War III is avoided. There is peace in our time.

If there are no amendments or deferrals, the discussion is followed by a vote. As always, the chair does not vote, unless it is for breaking a tie. That’s when you’ll see the chair breaking a sweat.

To sum up, a motion starts the discussion, it doesn’t finish it. In this way the motion focuses conversation. It encourages champions to do their homework and prepare recommendations in advance rather than trying to come up with ideas on the fly. Terrific teams use motions properly to improve collaboration and get the best results.

If you have any questions about Facilitation or want to learn more about how MAS can help, click here .