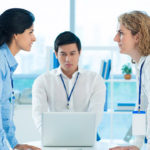 You’re working on a big project. Deadlines are approaching. Major work needs to be done. Numerous team members are involved. The goal is clear.

At the beginning of the project, things go smoothly.  But then trouble sets in. It starts out as a minor difference of opinion between team members. Then, there’s a stall in progress. Suddenly someone digs in their heels. Positions become more firm. Arguments ensue and no one is happy. Nothing gets done. It’s a case of team tension.

People work on teams because collaboration allows productive activity to flourish. One person doesn’t have all the skills, resources, or knowledge to get everything done. So teams form to foster synergy. The theory is that the whole is greater than the sum of the parts. Individuals can make progress, whereas teams can make magic.

But difficulties can arise because not everyone sees a project the same way. Team members bring different experiences, training, and points of view to their work. Sometimes, these clash. The result is team tension.

You experience team tension when you encounter the following symptoms:

So, you’ve discovered that team tension exists. How do you address it? That’s what we will look at in the next blog.

If you have any questions about Facilitation or want to learn more about how MAS can help, click here .